The timer beeps, signaling the end of your workout.

You normally feel pretty exhilarated after it’s over, but this was one of those workouts. One where there wasn’t a single movement you could come close to performing.

The rest of the athletes had hung from the rig, doing variations of toes-to-bars and hanging leg raises. Unable even to hang, you were on the floor with a medicine ball between your knees, trying to raise it to your chest.

When the coach saw your frustration with single-unders and quickly switched you to calf raises, you swore the whiz of all the double-unders in the room was even louder than the Metallica blaring overhead.

Shaking arms perched on the edge of a box, your performed “dips” that were barely perceptible. Across the room, your classmates looked far steadier as they moved up and down between the wooden rings.

Trudging toward the wall, you dread the novel you will write to describe your modifications when you log your workout.

All the fist bumps don’t change that feeling. That feeling that you’ll never get “there.” That it’s taking too long to see any improvement. That maybe you are actually in over your head.

I had more than a few of those days early on. A lot of it was due to my own unrealistic expectations. 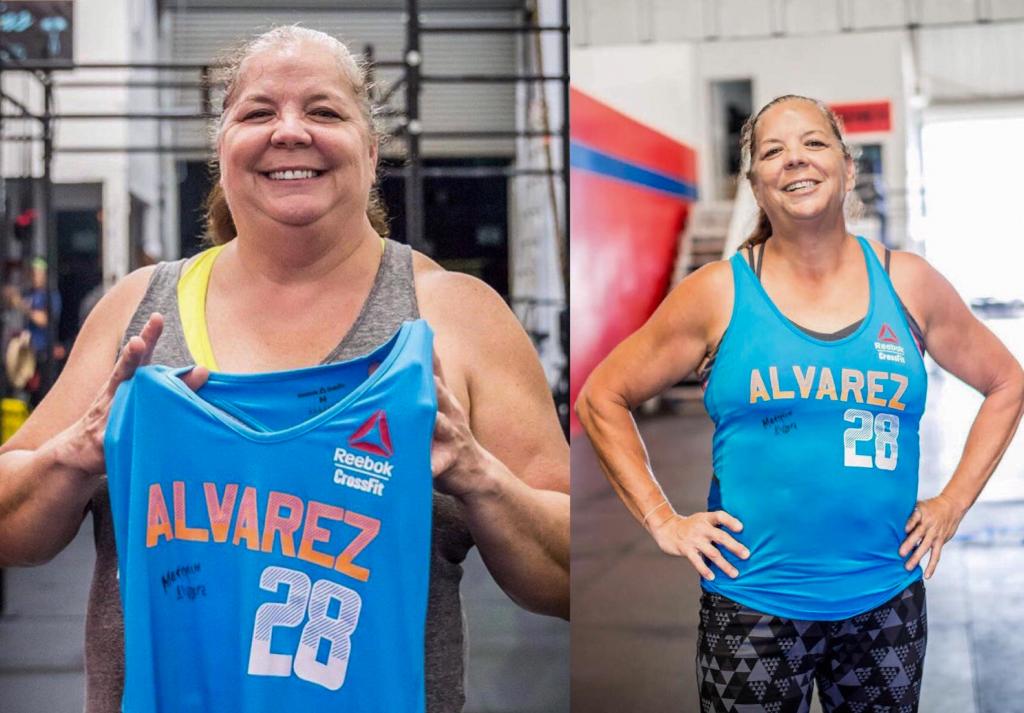 Jacque Mulleitner in November 2016 (left) and July 2017. She lost 72 lb. and was finally able to fit an autographed jersey Margaux Alvarez gave her at the CrossFit Games in 2015. Keep your eyes on the horizon and keep moving forward. (Mark Tablang)

I had been trapped in the binge-diet cycle and thought anything could change drastically in 30 or 60 days. Even though I started CrossFit morbidly obese, I initially imagined I’d have things like pull-ups and double-unders in a few short months if I came three times a week.

Of course, I quickly realized my imagination had to do some negotiating with reality.

That didn’t mean days like the one described above didn’t sting. After one particularly trying day, I seriously considered asking the owner if he could please, please make sure there was at least one thing I could actually do in each workout. I just couldn’t muster up the boldness to admit how crushing it was to me to modify a workout to the point it was unrecognizable from my perspective.

The first time I heard the phrase “leave your ego at the door,” I didn’t apply it to myself. I assumed that advice was for the strapping bodybuilder who just suffered through Nancy for the first time or the spin instructor who paid tribute to DT.

But the phrase was absolutely meant for me. And it’s also meant for you.

It was during one of those early pity-fests that I found myself reading the words below on the wall at Cross Fixx, and they can probably be found somewhere in your box, too:

I’d seen those words for weeks, and it finally dawned on me that the list didn’t include muscle-ups, pull-ups, double-unders and handstand push-ups. It didn’t say a thing about Fran, Cindy, Angie or Jackie. Those movements and workouts provide the constant variation that produces fitness and the benchmarks that test it, but mastering a movement or workout isn’t truly the end goal.

We want to live longer, avoid chronic disease and be able to thrive when faced with a challenge. In the gym, that challenge might be Fight Gone Bad. In real life, it might be racing to get help or pulling someone to safety. It could be as profoundly simple as setting an example that keeps your children from becoming obese or makes your aging parents rethink what a healthy meal looks like.

After this realization, things changed dramatically for me. CrossFit had already educated me on the importance of record keeping so I could identify any and all metrics that were improving. I just needed a personal set of benchmarks to record and—hopefully—crush on a regular basis.

Endurance improvements were easy to measure: Row or run/walk for a set period of time and try to go further each week. Or I could run or row a set distance and then re-test to see if I could complete it faster. Sound familiar? These are your basic AMRAP and for-time workouts.

For accuracy, I would see how many wall-ball reps I could complete in a row before a no-rep appeared. When I increased the height of the wall-ball shot, that was a strength PR for me.

For stamina, I would regularly multiply the total reps completed in a WOD by the weight I was using, then divide it by the total minutes to get a weight-per-minute number to try and beat. Yeah, I’m a numbers geek, but seeing the upward trend was motivating and made me care less and less about being able to click the Rx button. 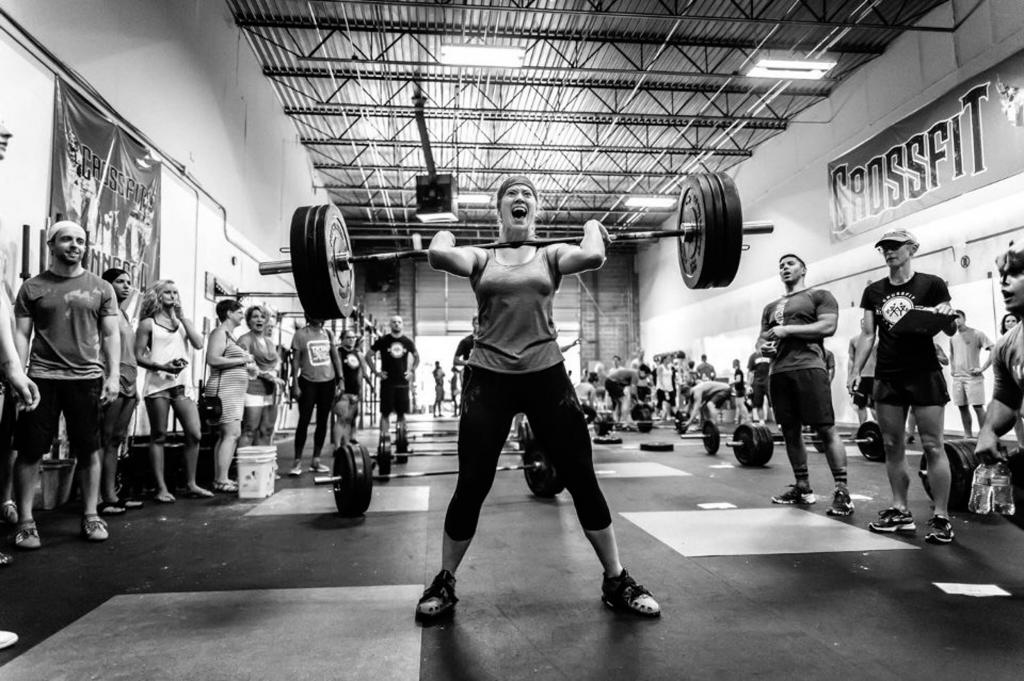 Five months into CrossFit, I did get to click the Rx button.

I remember being almost dismissive of the accomplishment initially: “Of course you Rx’d this. It’s an easy one.”

It was 10-minute AMRAP of 10 kettlebell snatches at 26 lb. and a 10-calorie row. That day it was easy. Five months prior, I hadn’t been able to strap myself into the rower because my belly blocked me and I lacked flexibility. I hadn’t been able to squat below parallel. In May 2014, when I walked in the door of CrossFit Fixx, there was no way I could have squatted down and pulled a 26-lb. kettlebell to my side. Never mind using the power of my hips to throw it overhead 50 times.

You will, too—as soon as you realize that you only need to compare yourself to the person in the mirror. No one else. It’s not that hard to become a little better every single day. A little stronger, a smidge faster, slightly more coordinated.

You can only build the body of your dreams with thousands of good nutritional decisions and hundreds of workouts that make you utter phrases such as “pain cave.” There is nothing fast or easy about the process. But it’s not hard, either. Hard is living obese. Getting fit gradually is glorious compared to that. And living fit? I maintain that an entire year of working out and eating clean is easier than any single day of living in the obese body I had for over a decade.

Instead of focusing on all the things you can’t do today, start celebrating the ones you can. Start challenging yourself to add to that list every week until all the can’ts are in the rearview mirror.

Part 1: “An Open Letter to Those Who Need to Lose Weight”

Part 5: “Your New Diet in the Real World”

About the Author: Kai Rainey lives with her husband of 21 years in Tucson, Arizona. At 42, she was over 300 lb., with a BMI of 49.9. She lost over half her body weight through CrossFit and healthy eating. In November 2017, she earned a CrossFit Level 1 Trainer Certificate. She hopes to reach others who are battling obesity and help them take steps to reclaim their lives. Read more at Mylastfatsummer.com.

Change Your Life in 24 Hours »